The production of renewable energy is increasing each year, and investments in offshore wind power is an important step toward a future without fossil fuels. The 20 turbines will be installed at the wind farm Borkum Riffgrund 2 in the German sector of the North Sea, which is being developed by the Danish company DONG Energy. Each of the enormous eight Megawatt turbines stands 187 meters tall above the sea level and has a wingspan of 164 meters. Such a size requires a steady and safe foundation.

- This project reconfirms NGI's role as world leader in offshore geotechnics. The contract with DONG Energy means that NGI will install the foundation after the jackets have been placed on the seabed. We are very pleased to be able to contribute to the green shift towards renewable energy, says Audun Hauge, project manager for NGI.

After the Offshore Contractor has placed the Suction Bucket Jacket on the seabed, NGI will install the foundation by pumping water out of the buckets. This creates a suction/vacuum, which press the buckets into the seabed. These type of foundations are often referred to as suction anchors or suction buckets. Over the years, NGI has played a vital part in the development of this technology.

The Norwegian firm FRAMO is a world leader in pumping systems. NGI and FRAMO have collaborated on the installation of offshore anchoring and foundation elements using suction/vacuum since the 1990s.

- We are looking forward working with FRAMO and DONG Energy, and cannot wait to get started. We will commence with the planning and the production of the equipment instantly. The work with installing the 20 suction bucket foundations on Borkum Riffgrund 2 in the North Sea will take place the first half of 2018, says Audun Hauge. 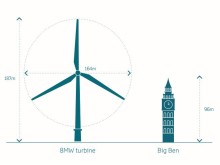 The foundation of the large wind turbines are challenging, as strong forces such as wind, waves and strong currents are playing a vital r...