Each of the five wind turbines is anchored to the seabed by three suction anchors. NGI evaluated the ground conditions and performed the detailed design of the anchors.

"This project is a substantial leap forward with renewable energy," says Thomas Langford, Head of Section Offshore Geotechnics at NGI – and proud to be part of the green revolution: "Our expertise gained through decades of offshore foundation solutions has now helped realise such an environmentally friendly offshore wind farm.” 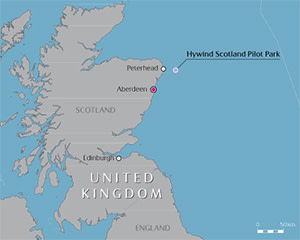 The technology of using suction anchors for offshore structures was pioneered by NGI and Statoil on an industrial scale during the 1990's. Suction anchor technology has been applied successfully to safely anchor and support more than one hundred oil and gas installations and fixed bottom offshore wind turbines worldwide.

Suction anchors, in contrast to steel piles, have the advantage of silent installation - avoiding disturbance of the marine environment. At the end of their lifetime, they are also easily removed.

"The planned area of the wind farm was carefully surveyed and NGI conducted advanced laboratory testing of the retrieved soil samples. Ground conditions were found to be well-suited to suction anchors," says Technical Lead - Knut Schrøder, with his many years of experience of fixed and floating offshore installations.

"Rough seas and powerful winds expose wind turbines to enormous forces. The main advantage of suction anchors is their ability to resist high loads together with their straightforward, environmentally-friendly installation. This represents an excellent solution for next-generation wind turbines, which will only increase in size and capacity," says Schrøder.

Each anchor resembles an upturned bucket. Water is pumped out creating a vacuum inside, which makes the bucket penetrate down into the seabed. The suction anchors at Hywind are 5 metres in diameter and penetrate 15 meters into the seabed.

Statoil is planning more offshore wind farms around the world based on Hywind technology. There are also plans to harness the power from floating wind turbines for the electrification of existing production platforms.