Production of renewable energy increases every year. Investments in offshore wind energy are an important move towards a more viable future for everyone. Norwegian advisors and suppliers to offshore wind farms are doing well abroad, but have been challenged due to a lack of large-scale ocean wind laboratory on the Norwegian continental shelf.

"Together with industry and businesses in Norway, NGI has many years of experience in the foundation of offshore oil and gas installations. I recent years we have contributed with research, development and advice on the foundation of offshore wind farms in major parts of the world. The Norwegian parliament's decision to facilitate offshore wind farms in Norway is therefore particularly positive news for everyone involved in the development of offshore wind, both research institutes and advisors, as well as industry and businesses. This will help strengthen Norwegian industry's competitiveness abroad, "says Karl Henrik Mokkelbost, Market Director for Offshore Energy at NGI.

With the support from the Research Council of Norway, NGI and collaborators, such as NTNU, IFE, Dr Techn Olav Olsen, Statoil and Statkraft, contribute with knowledge and research that supports the needs for the industry to offer smarter, less expensive and more secure solutions for the foundation and anchorage of offshore constructions.

Technology transfer from oil and gas

The world-leading expertise NGI within the field of offshore foundation and anchorage is the direct result of many years of research and innovation efforts. Technology originally invented and developed for the foundation of oil and gas installations, has found its way to offshore winds over the last 7-8 years. Most recently in connection with the establishment of Statoil's floating offshore wind farm, Hywind, off the coast of Scotland.

In the 1990s, NGI started work on developing a new method for the foundation of jackets and platforms for offshore constructions. The technology of bucket-based foundations (Suction Buckets or Suction Anchors) has been used worldwide to provide a safe base on the seabed for over 100 platforms. The technology is increasingly gaining popularity in the secure foundation of offshore wind turbines, "says Karl Henrik Mokkelbost.

The increased investment in domestic wind power in Norway will give research institutions and universities an even better basis for supporting Norwegian businesses in the development of renewable energy. Something that will benefit both the industry and the environment in the future. 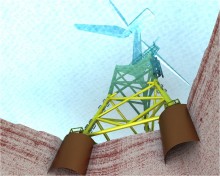 Knut H. Andersen, Rune Dyvik and Per Sparrevik will be inducted in the Offshore Energy Center's Hall of Fame in Galveston, Texas USA. All three have been pillars of the NGI team working on off-shore foundations.